All We Ever Wanted — Emily Giffin 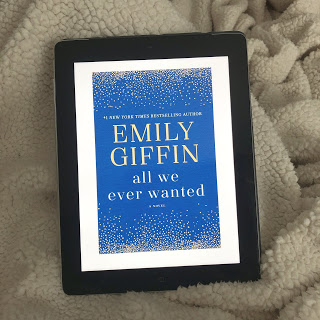 When suburban-Nashville darling Finch Browning is accepted to Princeton, his parents Nina and Kirk are thrilled. To Nina’s dismay, however, she discovers that Finch has made a serious mistake at a boozy house party that could not only have serious repercussions on his academic future, but could instill myriad disruption in the community.

At the aforementioned house party, Finch and his buddy Beau encounter a pair of younger girls, one of whom is Lyla, a sophomore with a hardworking and respectable carpenter for a father and an alcoholic absentee mother who hails from Brazil. Lyla’s Latina appearance paired with a youthful tendency to overindulge at times create the opportunity for Finch’s inexorable decision: Lyla has passed out, and Finch posts a sexually explicit photo of her with a racist caption that immediately garners attention not only from classmates at their elite prep school, but among their parents as well.

Instantly, the reader is given clear insight into the personalities of Nina and Kirk and Lyla’s father Tom in their reactions to the incident. Naturally, Tom strives for justice. Kirk’s inclination is to sweep everything under the rug and protect Finch’s reputation, not wanting his son to lose everything because of a momentary lapse of judgement. Nina, however, longs for justice for Lyla, knowing what it is for young women to be assaulted and taken advantage of in vulnerable states, and she refuses to allow Finch to live without consequences when she knows that Lyla will never be the same. These reactions and the subsequent courses of action to procure these outcomes take Lyla, Finch, Nina, Kirk, and Tom through trying situations wherein everyone is forced to face some realities that are less desirable than we’d like to think.

All We Ever Wanted is well-written and direct. Readers will be interested and invested in certain elements of the stories and he-said-she-said that float around Belle Meade and will recognize archetypal characters instinctually coming into play. I must admit, when I picked this book up it was absolutely based on the cover, and I was expecting some easy reading chick-lit, and I walked into something a bit more substantial, which I appreciate. It exceeded my initial expectations and would likely serve well as a book club pick, as there is plenty to unpack in here, but I didn’t find it incredibly memorable; it won’t stand out next to, say, Beartown with its similar themes. That said, the essential plot touches on topical issues such as consent, honesty, fidelity, financial privilege and struggles, and a whole host of other emotional conflicts that frequently arise in a suburban setting where the wealth gap can be severe, which is always a strength in a novel’s composition.

Get All We Ever Wanted here or at your local library! Happy reading 🙂